There were a few firsts at this workshop - Jonah’s first time as an instructor trainer, my first day in the job as the new Community Development Lead for Software and Data Carpentry, and Macquarie’s first-ever instructor training event.

We may also have had the biggest-ever workshop etherpad, coming in at 1400+ lines, but that would be a tough claim to substantiate. Certainly the eventual size of the etherpad mirrored the deep engagement of attendees, who all worked very hard.

Eighteen people attended the training, most of them from Macquarie (a mixture of postgrad students and IT/research support staff), but there were also attendees from local institutions UNSW and the University of Sydney.

Feedback was plentiful - we did both sticky note feedback and One Up, One Down twice - and we were praised for the friendly atmosphere and the energy we brought to the workshop.

A talking stick circulated to make sure quieter voices got to have their fair share of the conversation, and this attracted a favourable mention in feedback. 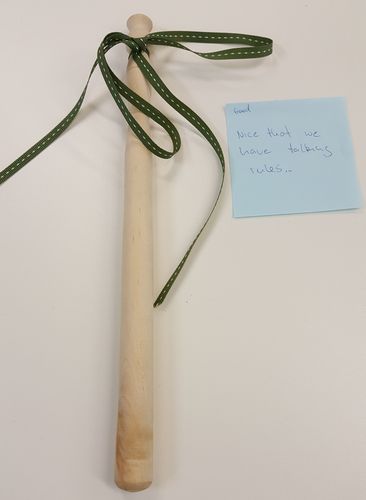 Enthusiasm to build community and to get the skills out to others was high, though as one attendee
commented a little ruefully in final feedback: “Daily noise gets in the way”.

Jonah was forced to multi-task through one session, taking advantage of some audience challenge time to fix problems on the Software Carpentry website, which had disappeared from view because of a Jekyll page build problem. All was luckily fixed before the class raised their heads again. 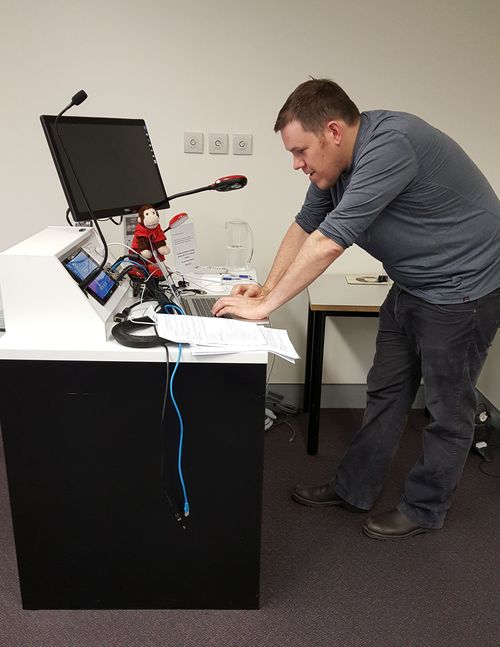 Attendees were keen to put what they had learned into practice, and most enjoyed the live teaching practices more than they had anticipated. As with most workshops, some people wished they had learned some of the material long ago!

Jonah and I both appreciated the efforts of our magnificent, well-organised helper Carmi Cronje, who scribed for us tirelessly throughout the workshop. Thanks must also go to Emily Brennan, Project Coordinator in the Office of the Deputy Vice-Chancellor (Research), who worked very hard to make this workshop happen, and Professor Peter Nelson, PVC Research Performance and Innovation, who funded the workshop.

Macquarie are very keen to develop strong communities of practice around skills and training, and this workshop was a fantastic first step. I look forward to welcoming the class to the Software and Data Carpentry instructor communities.