This was a Self-Organised workshop led by COMBINE with help of local organisers mainly from the Menzies School of Health Research. After some emailing back and forth, three months before the workshop, we planned to have an R data carpentry workshop based on the answers of a custom-made survey (prepared by Steven). Then, two COMBINE instructors were called, so Westa and I volunteered for this workshop and started with preps. The workshop was capped for 30 people with a nominal fee to cover for catering ($50 AUD). People were well-disposed and a good sign was that 45 days before the workshop the registration reached its limits. Later on, there were 2 dropouts and we were able to add 2 people from the waiting list.

##The workshop## Westa and I arrived to warm Darwin at around midnight and saw an amazing starry sky. It was going to be our first workshop together, coming from two different institutions (University of Sydney and The University of Queensland. We had COMBINE in common and a few prep chats. On the first day, we arrived 45 min earlier to the location and found Amar and Zuli organising morning tea and setting up the Menzies seminar room at Charles Darwin University. People started to arrive and everyone came in with friendly smiles. We had close to zero installation problems, on day one. Attendees actually did install all the software and this must be highlighted as most of them used Windows laptops.

Our schedule was focused on teaching R in RStudio, with a bit of data management and version control. From the 30 registered attendees, there was a 50-50 ratio between females and males. About half of the attendees were from Menzies, the other half from other CDU schools. We had a group of mostly PhD candidates, but also masters and undergraduate students, one third were Drs (PhDs), with one Associate Professor and one Professor. All very smart people. Also, a bit less than one-third of the attendees were already using R.

It was definitely one of the best workshops I’ve taught at and participated in. Why was that? Well, because of the group. You guys made it work out by asking questions, by being creative with the answers to challenges, and by sharing with your neighbours. In summary, by enthusiastically interacting, which is the essence of a Software/Data Carpentry workshop. Another thing I really appreciated with this group of people was the constant feedback. We had comments during the lesson, breaks, and after the workshop. This only showed how involved everyone was and how much they were enjoying the new learning.

The first day, we did not finish just because the workshop did. Although we gave them voluntary exercises for the next day, we also invited them for the first COMBINE meetup in Darwin! We had some nibbles and refreshments from COMBINE and Sam/Beachfront. It ended up being a very bonding experience - I got to ask about their projects and about Darwin. I discovered that many people actually do not come from there, that there are crocs everywhere, and that we were in the best season weather of the year! At the end everyone was happy to say: “see you guys tomorrow!” 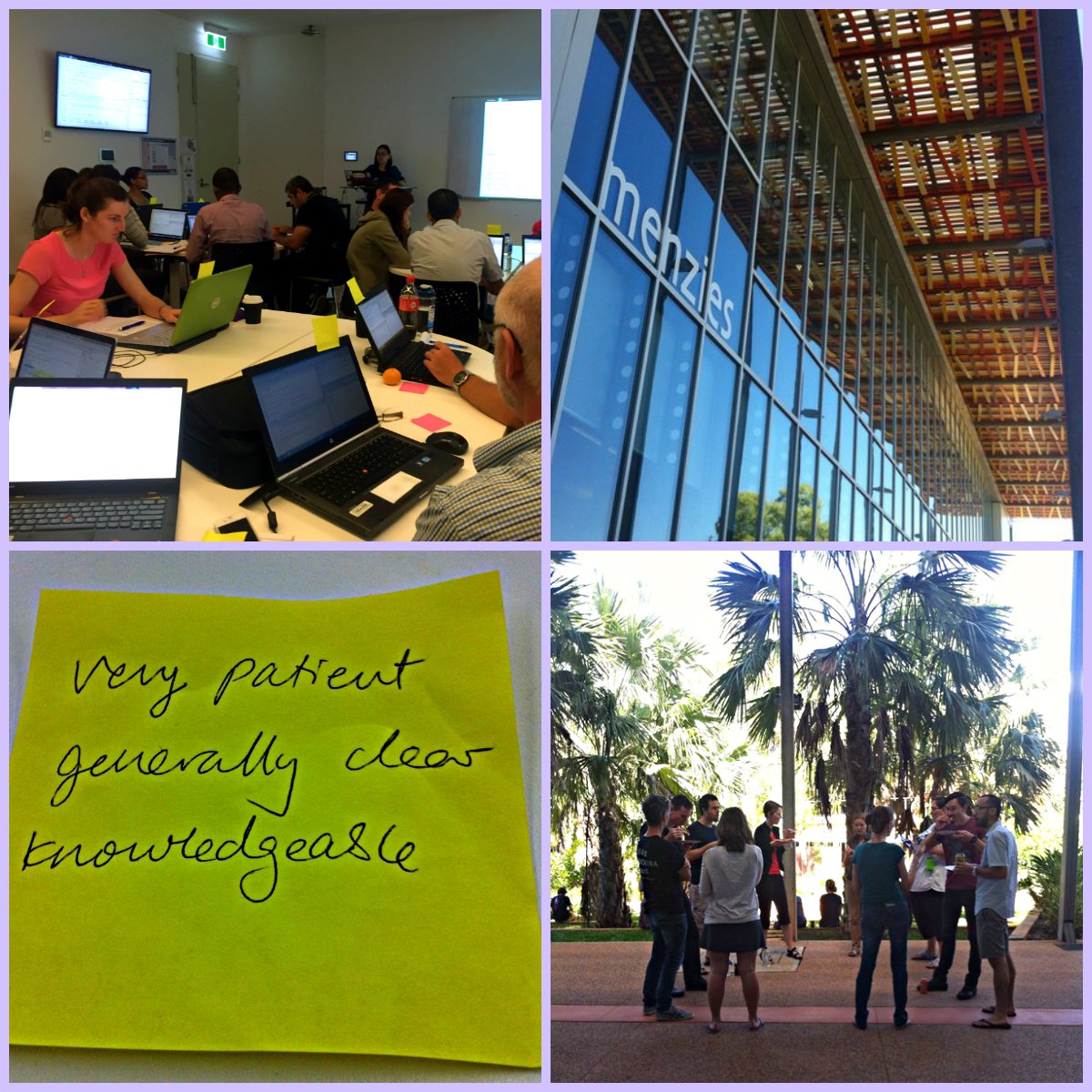 The second day, we did some plotting and it was nice to hear all those “WOWs”, “That’s beautiful”, “Ahhhhs” and so on, and so on. I think, and from the feedback I can say that everyone had a good time plotting and finished with a thirst for more! Our last part of the workshop involved interacting with Git. We had some trouble connecting Git with RStudio, although everyone had it installed. Windows laptops were very troublesome - at the end probably about 4 people were not able to link these two due to administrative restrictions on their laptops.

Finally, we showed them how to use Git from the command line and from RStudio. Also we managed to produce the first version of the R scripts they wrote during the workshop. We tried to uplift the motivation with a few individual examples and then shortly afterwards, we wrapped up the workshop. I loved that crowd and I will be happy to return (wink), also I have unmet expectations of visiting Kakadu (wink, wink).

##Acknowledgements## Funding from the Australasian Genomic Technologies Association (AGTA) through a COMBINE workshop development scheme. To COMBINE former and current presidents: Harriet Dashnow and Jane Hawkey for setting this up, and Westa Domanova as co-instructor in this workshop. To Menzies School organiser and helper [Amar Aziz] (https://twitter.com/s_lump). To everyone who helped with organising locally - Steve, Jess, Jess, Linda, Erin, Zuli and Sam. To all awesome attendees, you made this a real success!!!

##Highlights## This workshop was included as part of the Charles Darwin University Research Enhancement Program (REP), from which PhD students benefit - they need to attend a number of these workshops during their candidature. The first day of the workshop May 12, we had the first Darwin COMBINE meetup, where all attendees were welcomed plus all other interested in Bioinformatics/Computational Biology. It was a great night, with high chances to be repeated.

I hope you enjoyed this experience as much as I did. 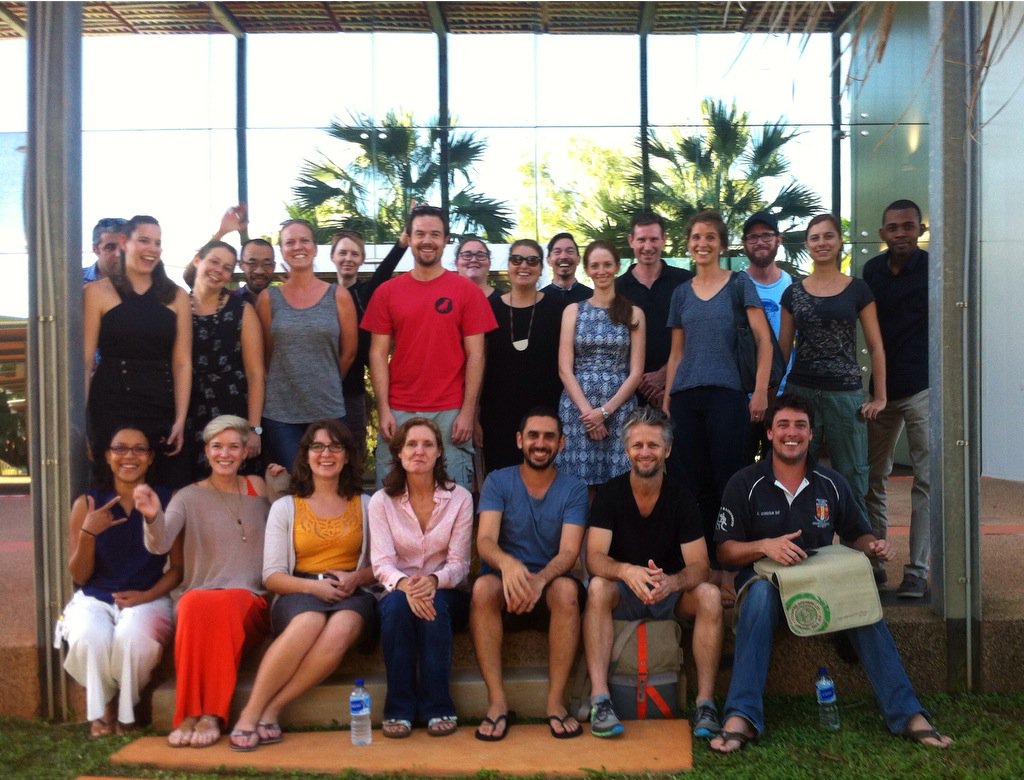