Software and Data Carpentry recently held their first ever Instructor + Helper Retreat. The aim of this event was to bring instructors and helpers together remotely and at local sites around the world for a day of sharing skills, trying out new lessons and ideas and discussing all things instructor and helper related. This Retreat attempted to meet these goals via 17 local meetups in North America, Europe and Australia, 14 sessions broadcast globally via Google Hangouts on Air, and many people participating remotely by watching and asking questions at the global broadcast sessions.

In addition to bringing the community together, the Retreat also has generated additional resources surrounding many topics of interest to Software and Data Carpentry instructors and helpers; the global broadcast sessions are archived on YouTube (pending session leaders leaving them up) and can be watched at any time. The links to these videos are archived on the Retreat website. Notable other moments from retreat as captured via twitter can be accessed here.

Surveys to collect feedback from ~50 participants indicated that 64% of participants were Software or Data Carpentry Instructors, 17% were instructors in training, 9% were Helpers, and 6% identified themselves as not previously being associated with either Software or Data Carpentry prior to the retreat. Of the Instructors who completed the survey, 40% also identified themselves as Content Contributors.

How did people participate?

The survey also provided some insight into how people actually participated at the Retreat. Most people participated in the Retreat through conversations (89%), round table discussions (89%), watching Global Broadcast sessions (64%) and examining new teaching materials (42%). Fewer people participated by actively contributing or commenting on the global broadcast sessions (17%), practicing teaching (15%) or writing/reviewing material (17%). Building community and expanding people's Software and Data Carpentry networks also was a big part of the Retreat, with 98% of survey participants stating that they met someone new. A breakdown of how many new people each survey participant met is below: 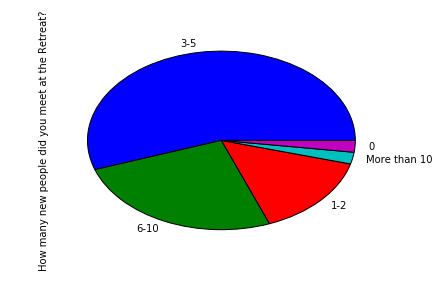 We also asked survey participants for their expectations of the day and whether they were met. Expectations were broad, but common themes included meeting others from the Software and Data Carpentry community, learn more about Software and Data Carpentry, learn about and discuss material being developed, as well as discuss and practice teaching methods. 74% of survey participants reported that the Retreat met or exceeded their expectations.

The mentoring committee is keen to host another retreat next year, and in thinking forward to making the event bigger and better, we would love to receive your ideas for next year, more feedback on this years event, as well as volunteers to help with the planning and organizing the next Retreat. We would like to collect feedback from your experience at the retreat via this survey. Those keen share ideas for upcoming Retreats and/or those wanting to volunteer to help out with next year's Retreat are asked to email the mentoring committee.