Not a single negative was recorded about the people either teaching or helping out at the Brisbane Software Carpentry bootcamp last Thursday and Friday (2-3 July). There were a lot of positive comments though:

Negative comments largely focused on pacing—a 75%/25% split between too fast/too slow, the sound quality (there were microphone issues which made it hard to hear at times especially when lots of people were getting help, which added to the noise), problems with software (surprise, surprise) , and the vagaries of wireless set up and connectivity. Even the room itself got a minus from one attendee for not being bright enough or warm enough (it is the middle of winter in Brisbane).

Despite having helpers on site an hour before the workshop, we still had some attendees with setup issues as the first (Shell) session began on day one. Luckily with six helpers available, plus the instructors not actually teaching, there were enough supporters to get these people sorted while the rest of the class cracked on.

We were lucky with our support numbers—we had six certified instructors attending (one of whom—me—was attending the workshop as a learner as well), plus six helpers, many of them Python experts. For all the instructors, it was their first Software Carpentry workshop since qualifying, so we were keen to discuss what worked/what didn't work so that we can do better in September when our next bootcamp is scheduled.

We had a large number of women both as attendees and as instructors and helpers. Out of 40 attendees, 17 were women—almost half! Four of the six instructors were women.

The workshop was BYO laptop. We had a mixture of operating systems to deal with—about a dozen Windows machines, a few Linux laptops, and the rest Macs. To counter issues with people not being able to download or open programs, we used a DIT4C container (initially set up by Tim Dettrick for ResBaz in Melbourne) to allow people to use Python, the shell, Git and sqlite3 within a Web browser. While this worked well for those using it, there was inevitably confusion at the start of sessions as people worked out which instructions to follow.

The Git session attracted the most positive comments (12) and the fewest negatives (1). What sold people on this was—overwhelmingly—the provision of context. As we learned in instructor training, people need to know why something will be useful before they will invest the energy to learn it. A couple of attendees even wanted more Git, which is a good sign.

Next time, we will aim to teach three things—Shell, Git, and either Python or R—not four. Trying to cover SQL as well was too much for two days, though the SQL session was very positively received. We did receive comments that the "program was too ambitious" and "too much for two days".

Since the workshop ended, four participants (10%) have expressed interest in instructor training, which is great.

Some of the participants had come prior to attending the annual UQ Winter School in Mathematical and Computational Biology, which started on 6 July. We might plan a workshop next year just for those attendees as we had to turn away a large number of Winter School people. Our bootcamp sold out very early, and we ended up with a waitlist of 30 people.

For next time, we need to: 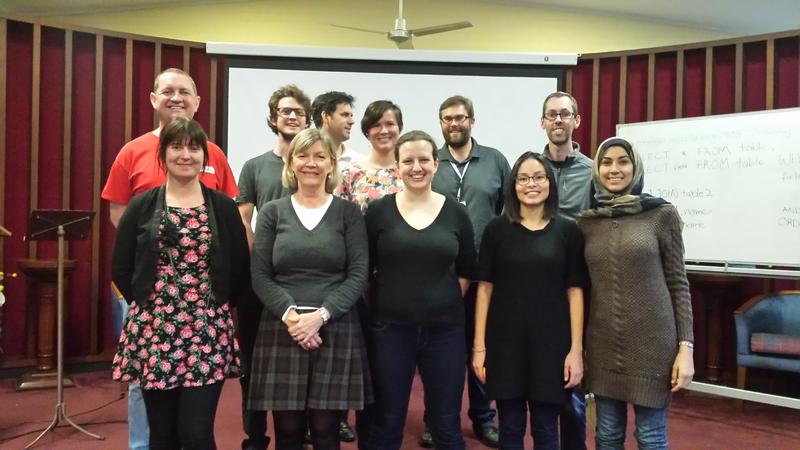 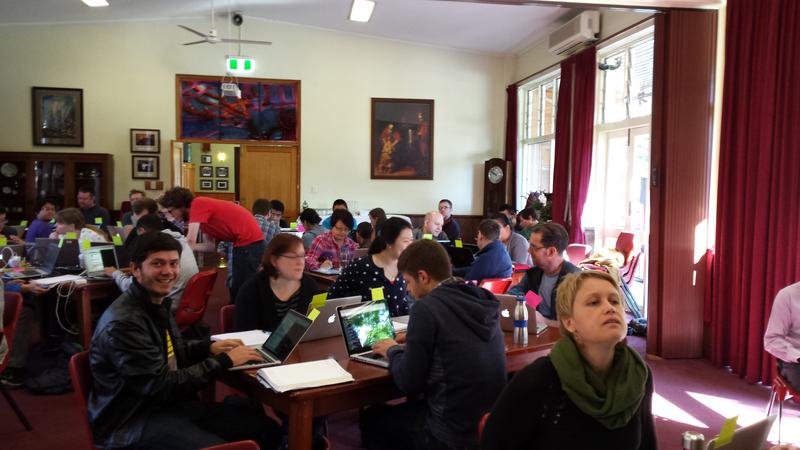 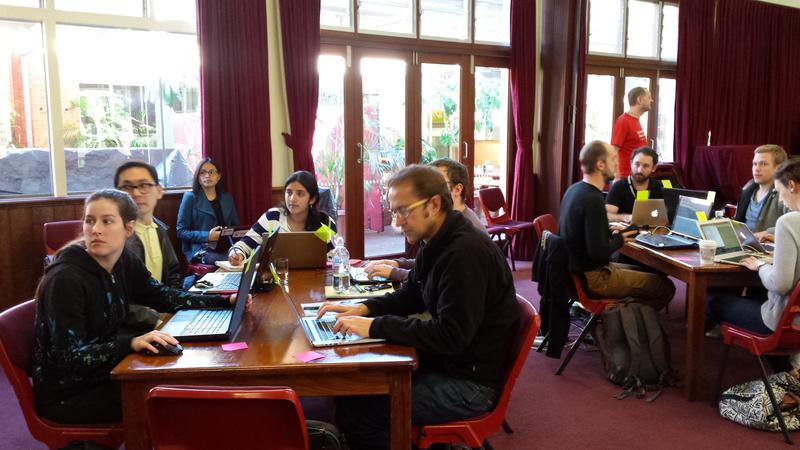 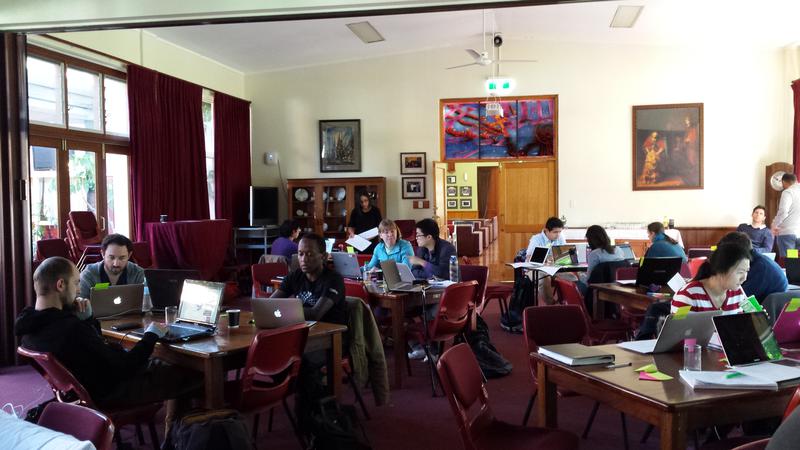 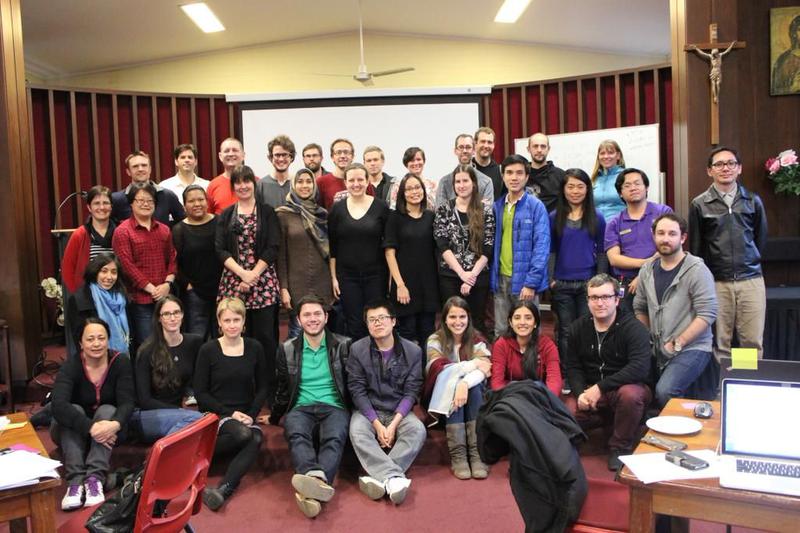 Bootcampers, instructors and helpers—end of day 2 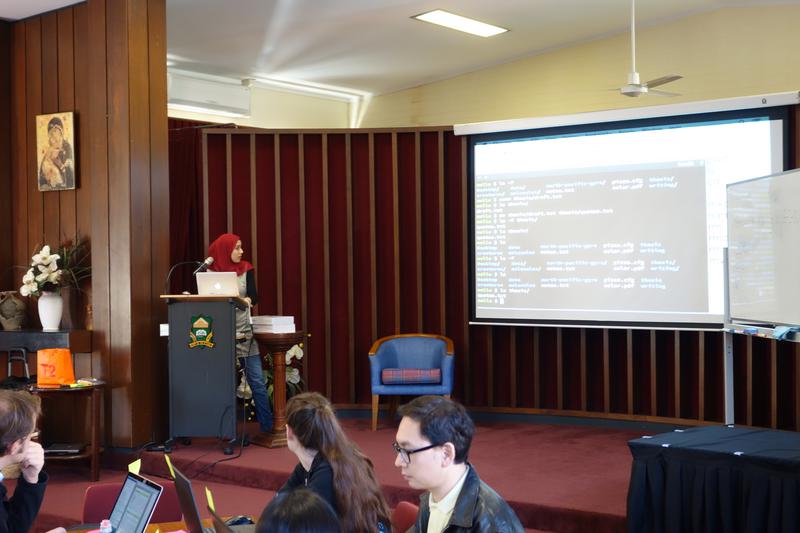 Areej Alsheikh at the podium