It's been knocking around for a while now, but this week saw a big new release of the Open Research Glossary, a crowdsourced glossary of terms, acronyms, tools and concepts in and around open science. There's a lot of jargon in this area and it's often a barrier to understanding for the uninitiated. For example: 'green', 'gold', 'diamond' and 'hybrid' open access are shorthand terms which aren't always fully understood.

The alphabet soup of acronyms are even worse! Take SHERPA/RoMEO for instance: it's a brilliant resource for checking author self-archiving rights relative to publisher-imposed restrictions and embargoes, but the name 'SHERPA/RoMEO' doesn't exactly make that clear. This glossary aims to elucidate all the need-to-know terms in open scholarship.

The glossary compilation was initiated earlier in the year by myself and Jon Tennant after some really useful feedback on one of our open science talks. It emerged we had been guilty of loading our talk with too much technical jargon and too much assumed knowledge for some of the audience, and we had failed to communicate some of the core ideas as a result. So we decided to do something positive about this and create an entry-level community-written guide to all the most commonly referred-to stuff in open research.

There's no way we could have assembled all this content ourselves - it was a community effort. Huge thanks go to named contributors: Richard Iannone, Chealsye Bowley, Martin Poulter, Matt Hall, Priscilla Ulguim, Lou Woodley, Sibele Fausto, Nazeefa Fatima, Karen Cranston, Lauren B. Collister, Alasdair Taylor, Matt Menzenski, Patricia Herterich, and to all the countless anonymous contributors too! The glossary is intentionally supplied under a Creative Commons Zero waiver so it is completely frictionless to copy, repost, re-edit, remix, translate, and redistribute. Please do spread this around, it's there to be used. 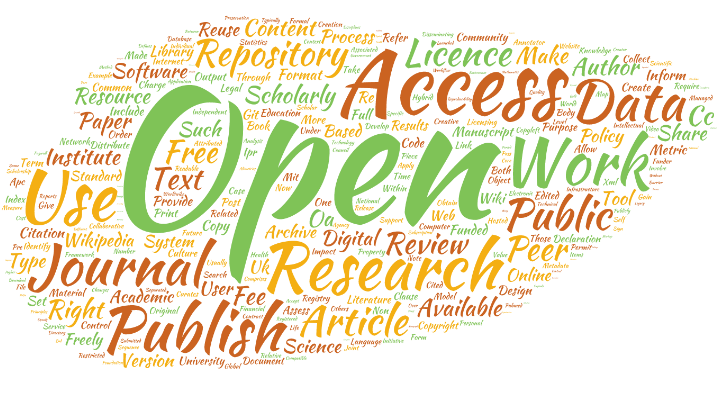 A wordle of the glossary content. 'Open' is unsurprisingly the top word!