Last weekend we (Paulina Lach and Piotr Banaszkiewicz, both from AGH; Klemens Noga from Cyfronet and myself from Cztery Bity organized a workshop in Kraków. We decided to do itourselves, as a group of certified Software Carpentry instructors, which was simply a faster and more effective solution than finding an institution which would act as a host. However, we received significant support from a few organisations. The PhD Students' Association at the Jagiellonian University offerred the venue. Thanks to the support provided by ACC Cyfronet AGH and Cztery Bity we were able to offer small catering. We were also supported by great helpers: Iwona Grelowska, Jakub Kruczek and Tomasz Jonak, all from AGH and Marcin Klimek, from Cztery Bity.

We used the original Software Carpentry materials without translating them into Polish, but we taught in our native tongue.

We coordinated preparations for the workshop using Trello and it worked flawlessly. We only had one meeting in person 2 days before the workshop. Everything else was done via collaboration on Tello.

The workshop took place on February 21-22, and had the following schedule:

The venue was excellent: Collegium Maximum is located close to the city center which made it easy to access for all attendees. The staff on site was very helpful and thanks to them the workshop run smoothly. In fact, we used this venue almost two years ago when we run the first workshop in Krakow. We bumped into slight problems with the WiFi. Fortunately, we had a backup LTE router and eventually we got everyone online.

The registration for the February workshop filled up within 5 days. Even though we decided not to charge any fee or deposit, the attendance was still pretty good: out of 41 people 36 showed up on Saturday morning. Seven people didn't come on Sunday since they found workshop's curriculum too easy for them.

We started with the bash lessons delivered by Klemens. Klemens is an experienced teacher and leads trainings activities at Cyfronet.

He used the materials from the "shell novice" repository and progressing with a steady pace managed to deliver the material from its very beginning up to the part about loops (so 5 lessons were covered in total). At the end of the module, just before the lunch, we collected the feedback from the participants on the sticky notes (one good and one bad thing) and here is what they thought:

After the lunch I started with the Python lessons. Since I am a full-time trainer I have lots of experience in teaching Python but usually I have the comfort of having at least three days to run the training as opposed to one afternoon. I've decided to use IDLE shell, because I'm very comfortable with that setup.

I started with the "Python novice lessons". But given the pace I was going through the first lesson I decided to go with loops, nested loops and conditions using "ad hoc" examples - I'm quite comfortable with that. Then the participants could combine all this knowledge in solving a simple task: printing prime numbers in the range from 2 to 100. This exercise concluded the lesson.

Again we asked for the feedback on the sticky notes:

The second day started with Piotr giving excellent lesson on version control using Git. It was his first time as an instructor but Piotr handled it very well. He was well prepared and had good knowledge about the subject. Piotr followed the Software Carpentry materials although he did not use pair-githubbing. GitHub cheat sheet handouts were given to the participants and most participants really liked them. However, some suggested that we should prepare a cheat sheet that closely followed our lesson plan. A quick poll showed that 14 people (out of 22 notes collected) wouldn't mind pair-githubbing next time. In general, the attendees thought that the module was very well paced.

At the end of the workshop Paulina gave a short lesson about SQL. Paulina decided on using SQLite plugin for Firefox. At the beginning we were encountering some problems with plugin setup. For example, some people didn't have Firefox installed because they were hoping that the same plugin will work in Chrome/Safari (but it didn't). Another problem was the fact, that font in the plugin could not easily be enlarged and so the people in the back of the room could not see what was on the display. We eventually managed to fix that but it took us some time adding to the total delay. As a result the participants were complaining that lecture was too short.

Some lessons learnt from our workshop: 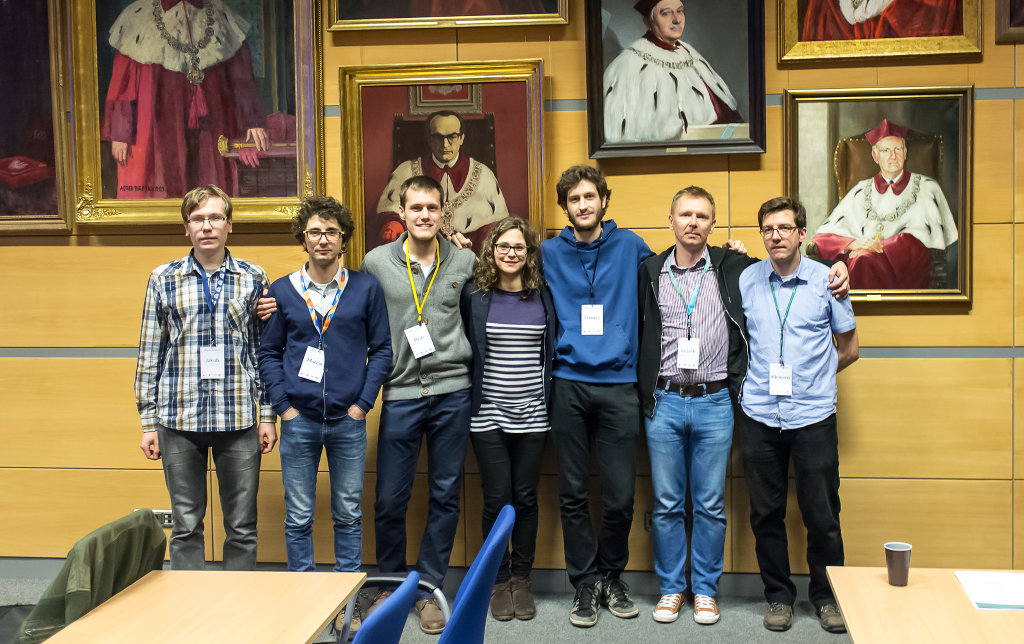