On Sat 7 March I spent a full day teaching a Software Carpentry workshop at the University of Yangon with 23 archaeologists from the Department of Archaeology. The workshop is part of a training component of an archaeological research project funded by the Australian Research Council, the University of Washington and the University of Wollongong. The group included graduate students, tutors and lecturers. Archaeology in Myanmar has a strong art history flavour, partly due to its British colonial heritage (where archaeology and art history are often paired, compared to the where US archaeology is usually a sub-field of anthropology) but mostly due to the country's extreme isolation from the rest of the world, where archaeology has taken a scientific turn in recent decades. This isolation takes several forms: travel restrictions that make it difficult for locals to travel overseas, and until recently, for foreigners to visit; small library budgets that make it difficult for university libraries to keep their collections and subscriptions current; and slow and unreliable internet connectivity make browsing the web, watching videos, and downloading files a lengthy, uncertain and frustrating process. All of this meant that the group's familiarity with using computers for research was lower than what might be expected from a Western audience, and so we adapted the SWC materials to accommodate this. We knew we wouldn't get through as much as a typical workshop, but we had the advantage of everyone starting at an equivalent skill level, so the sticky notes all went up and down at much the same time and we had a pleasant and relaxed atmosphere.

The first major adaptation was evident right at the start: software installation. We had half a dozen USB sticks with the workshop files and R, RStudio, and Rtools installers on them, and circulated these around the room to get the everyone's laptop equipped for the workshop. This took about 30 minutes and was combined with the "Files and Directories" lesson (though we didn't actually use the shell, just discussed and diagrammed the concepts). As it turned out, all the laptops were running on Windows, so there was no need for OSX installers for R, etc. or Xcode. We were unable to install R on two laptops, so we discussed pair programming and rearranged some seating. Much of the morning was spent on the first part of the SWC R lesson, getting used to the command line interface. We also took inspiration from the Data Carpentry lessons on R, which are a very nice orientation for people unfamiliar with research software in general. Since the csv format was unfamiliar (the SWC R lesson starts with reading in a csv file), we also spent some time on the difference between closed proprietary file formats such as xls and open file formats such as csv. Opening a file of each type in a basic text editor was a nice stark demonstration of the difference (an activity I got from Ciera Martinez). We didn't follow the lesson verbatim - I used the built-in iris dataset but changed the names in the data to make it a fake archaeological dataset. My hope was that one less element of cognitive overhead would make it easier for them to deal with the radical novelty of the read-eval-print loop of working with the R prompt.

After lunch we moved to packages, R markdown, plotting and reproducible research. While the concepts of packages and libraries in R was only mildly confusing (I counted that as a successful result), our main challenge was getting them installed in a timely fashion. I wanted to use ggplot2, knitr and rmarkdown and under normal conditions would could get these from the internet with install.packages(). Knowing that any kind of internet bandwidth during this workshop was a bit of a roll of the dice, I needed a simple method of installing these packages and their dependencies (ie. those listed in in the 'imports' field of the package description) that would work without any internet connection. I could have just made a note of all the dependencies and manually downloaded their source files, but I wanted a more general solution that would scale up nicely, if say I wanted to 10-20 packages to install offline. After asking around I was recommended the miniCRAN package (thanks Andrie!) and used it to prepare a local package repository. Using miniCRAN, I got the source files of the packages, rather than binaries, so I didn't need to binaries for multiple operating systems (though, as I noted above, everyone was using Windows in this group). miniCRAN also took care of identifying and downloading all the package dependencies, which saved a lot of bother. I put this local repository onto my USB sticks and had everyone copy it from the USB sticks when they were getting the installers and other files at the start of the day. This was a great success, with most people installing the packages very quickly and easily. Only two students had some kind of difficulty, they worked around it by connecting to the internet and getting the packages online, eventually. Had the entire class attempted to get the packages in the usual way, from an online CRAN mirror, we'd probably still be there waiting for the downloads to finish. Although there are no doubt other solutions, I highly recommend local repositories with miniCRAN to anyone going in to a similar situation of needing to use contributed packages with limited (or no) internet access.

For the afternoon session we switched from working at the R prompt to working in a R Markdown file, and talked about keeping a record of our record by saving it in a script file. For most of the afternoon we continued with live-coding and running code line-by-line from the R Markdown file, exploring the basic plot types with ggplot2 (and _not_ qplot). Much of this was very simple and off-script from the Software Carpentry core R lesson (though in preparing I drew from some excellent SWC R lesson material online elsewhere by Jenny Bryan, Scott Ritchie and others). The main point was to explore different ways to visualize the data and learn how to interpret plots. We wrote a simple function to demonstrate how to repeat custom operations. We ended the day with a very dramatic exercise to knit the R Markdown document into a MS Word document. After explaining the advantage of having code and text contained in the same document, we all counted down together, then simultaneously clicked on the 'knit' button in RStudio on our laptops, and marveled at the creation of a Word document with text, code and plots.

For a group with limited numerical and computational fluency, the day's activities was a tremendous climb up a steep learning curve. However, everyone enjoyed the experience and left with a favourable impression of scientific computing. It will probably take some more formal training before anyone in this group is routinely using R for their research. However, I think the workshop was a success communicating the basics of computing at the command line, using a programming language for data analysis and visualization, and some basic open science principles. We might ask what the point is of teaching scientific computing to a group that are so distant from the usual SWC audiences. I would say that the point is if we want this way of doing research -- reproducible transparent workflows using open source programming languages -- to become ubiquitous and normal, then we should embrace every opportunity to teach and raise awareness of it, especially among groups that are unlikely to hear about it from within their research community. 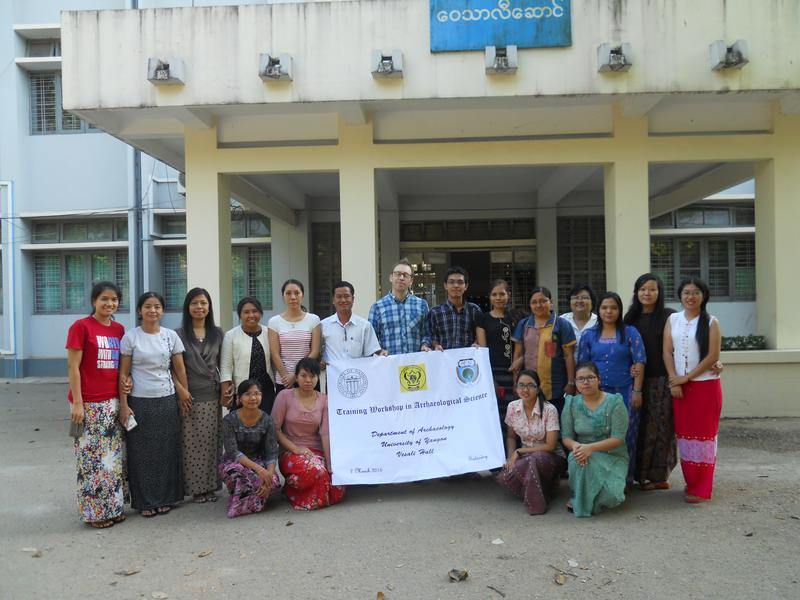