The iPlant Software Carpentry Workshop in February at the University of Arizona in Tucson was an awesome realization of iPlant's and BIO5's collaborative nature. Bringing together iPlant, BIO5, the UA and Software Carpentry, this workshop served a large group of students and staff from a wide variety of backgrounds and a wide array of interests. 53 participants registered within 36 hours of publicizing the workshop. Participant demographics were as follows: 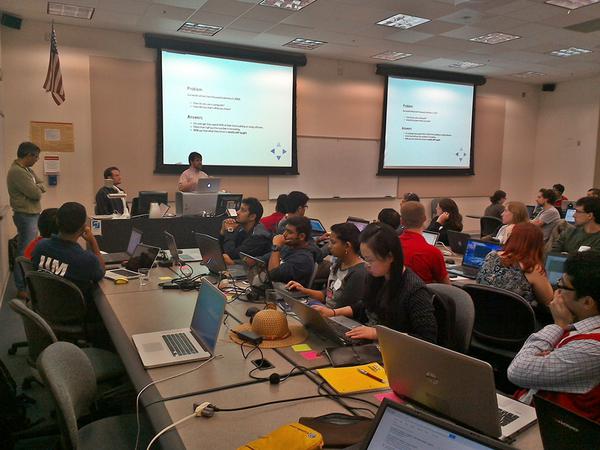 In Arizona, iPlant and AEGIS currently are working with ASU and NAU to support these institutions in offering respective workshops. The fact that demand by far exceeded workshop seats clearly shows that there is a strong need for this kind of training. Therefore, proposed next steps include increasing the number of instructors that are not only able to teach Software and Data Carpentry workshops, but that will use iPlant CI to do so.

iPlant developer Jonathan Strootman, and Plant Sciences postdoc Naupaka Zimmerman, instructed the workshop. They were assisted by 7 helpers, including myself and:

We are especially fortunate to have, with Jonathan and Naupaka, 2 Software Carpentry certified instructors on campus and that these two had been teaching already four workshops together in the past. What that means is that, unlike many other SWC workshops where instructors may co-teach that have not seen each other before, Jonathan and Naupaka had had (and used) the chance to build a coherent curriculum that took attendees all the way from Excel to publishable analyses and diagrams, using desktop GUIs, command lines, the Internet, and the cloud. Specifically, the curriculum entailed:

The workshop was a tour de force that, with students and postdocs, enabled exactly the right group of users to move their science to the next level.