Last week, xwMOOC xwMOOC ran the first Software Carpentry workshop in Seoul. The workshop delivered not only an introduction to Unix Shell, Git and GitHub, Python and SQL but also computer science unplugged, rur-ple, python for informatics and cloud basics. Listening to attendees feedback, attendees concerns such as software business, all about what start-ups should know, how software business environment looks like and so on are provided during three days workshops.

Due to lack of instructors, Victor did teach all the lessons. Unfortunately, Dave, who is supposed to be a helper, could attend the first workshop such that one of attendees, Mr. Seo, became a volunteer and did a wonderful job. Even though there were some software installation problems, Mr. Seo and Victor could overcome some technical difficulties. The Software Carpentry Installer has been tried initially, but the installer under the Windows 7 could not install all the software.

Initially we want to start small, but we had some concerns about churn rates. Therefore, we initially limit the number of attendees up to 23. Because the first Software Carpentry workshop was free, the registration has been closed two weeks ago. The final attendees have been check by RAPA(host) and the number was 17. Because the lesson contents of Software Carpentry are quite new, sort of advanced to Korean, and tailered to science and engineering, from the beginning Victor and RAPA paid special attentions to retention rates. Finally, we kept 12 attendees, which is over 70%. Our retention goal was 50%, 8 attendees. 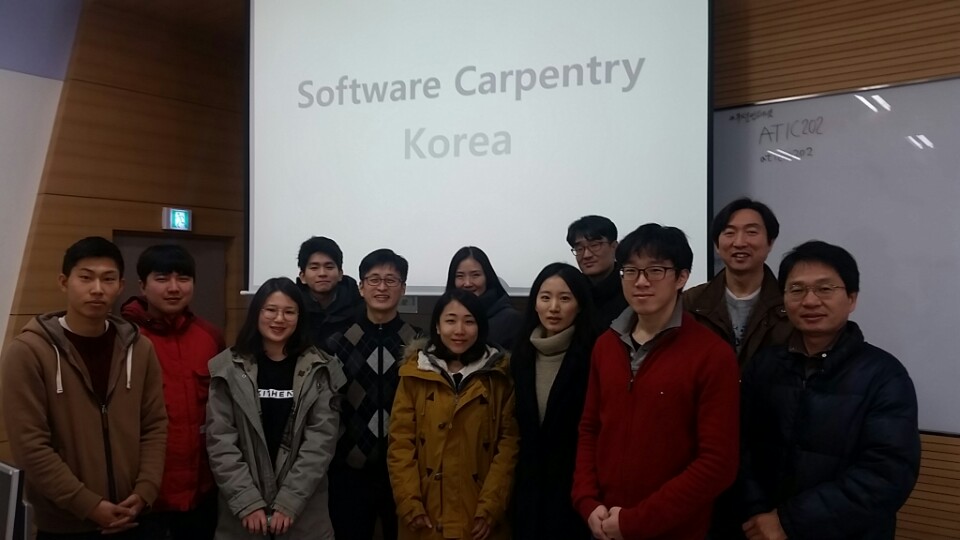 We encountered a number of software difficulties, mostly CJK problems.

The start of the first day we forgot gathering feedback (via sticky notes), but we explained how to use sticky notes and have got the feedback the end of the first day. Besides, we performed pre-workshop questionnaire and post-workshop questionnaire through Google Survey, but survey responses are all Korean. A selection of the attendees' comments (random orders) are translated as follows:

We lost 40% registors, but 10 attendees finished the workshop. The next workshop's date has not yet been set, but it will have more helpers and the Korean Software Carpenters are going to share Software Carpentry values widely and deeply. Moreover, $100 computers pre-installed with Software Carpentry and xwMOOC tools are under development. We look forwards to a second workshop.