First, we collected feedback on stickies at the beginning of each break and reviewed the notes immediately. This was prodigal of stickies, but gave us a much better idea of where people were and how individual instructors were doing than collecting feedback at the end of the day. We could also address lingering questions closer to the point of initial learning.

Secondly, at the end of the workshop, I asked for the students to identify specific actions they could take that afternoon or on Monday morning to improve their research workflow. The responses were as you may expect: start using Git, start taking scripting seriously. But I predict that the solid benefit of asking the question this way is that it moves students from thinking, "Oh, this is potentially useful and I'll keep it in mind," to, "I can make efficacious changes to the way I work now".

As a third point, I also asked students at lunchtime on our second day what else they would expect to be covered in a workshop like this. This generally yielded the answer that they hadn't really been sure what to expect and so anything else was gravy. This response didn't help guide our end-of-workshop plans, but revealed a weakness in how SWC was presented in our advertising and word-of-mouth.

This is only the second SWC workshop which has been held at University of Illinois, and they've both been successes. The teaching material generally has come a long way in the 18 months I've been affiliated with SWC—the weeks before a bootcamp used to be a frantic flurry of PRs and alterations, as opposed to this relatively tranquil review of the material. 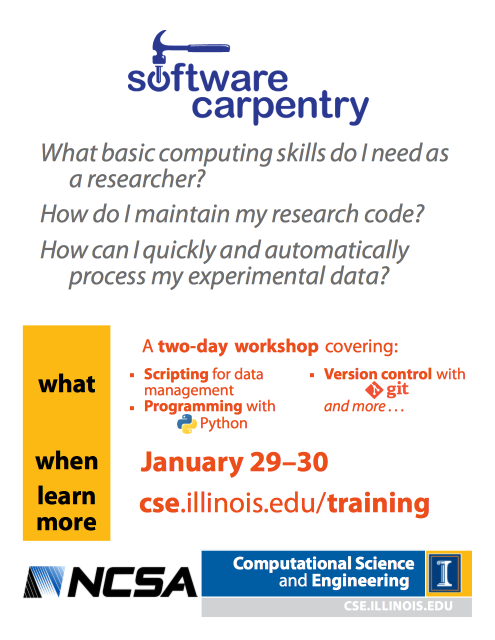