The most useful little guide to visualization I've ever found is the decision tree created by Andrew Abela, which you can find here. Do you want to show a comparison, a distribution, a relationship, or a composition? If it's a comparison, is it among items or over time? Each choice leads to a different kind of plot, and while you may not agree with all the choices, it makes the reasoning behind them concrete.

One day, I hope someone will turn that chart into a half-day lesson on visualization for Software Carpentry. Before then, though, I have a little visualization challenge that I think some of you might enjoy. This small data set shows population, number of workshop attendees, and number of instructors by country:

I'd like a scatter plot comparing workshop attendees per capita to instructors per capita. This little Python program does that:

(You can download the data and program here and here, and yes, the CSV has all those extra spaces taken out.) The plot produced by this program is: 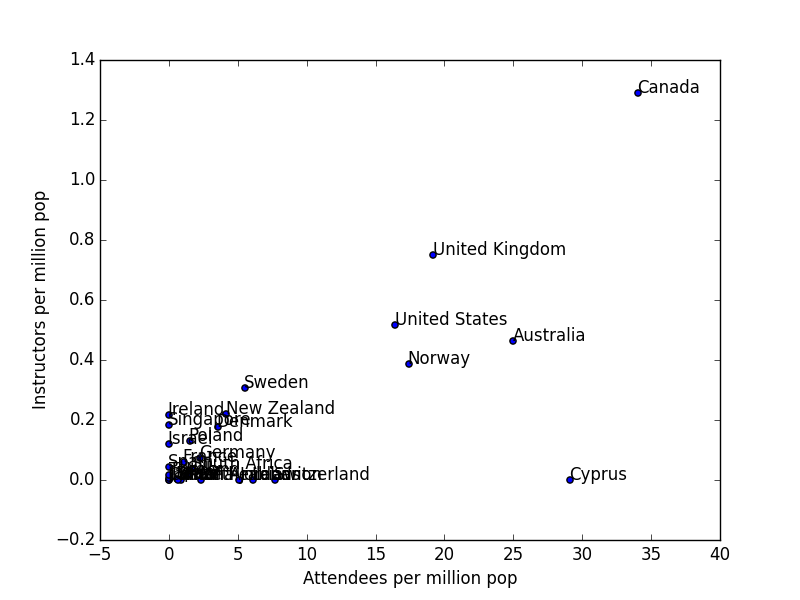 It's not particularly useful (which is Canadian for "it's awful"): labels overlap, values crowd near the origin, and so on. My challenge to readers is to create something better. More specifically, add a comment to this post with your code (in any language) and a link to the picture it produces, and explain briefly why you think it's better. And while you're thinking about how to do that, have a look at Ned Gulley's In Praise of Tweaking — if there's a way to do for visualization what his programming contest does for performance, I'd like to give it a try.