We pulled off our day-long data analysis bootcamp with hardly a hiccup yesterday. The schedule looked something like this:

I got a grant from Amazon to give all the students in the class a $100 voucher to use AWS. We only used about $1 during the course. Luckily everyone registered and tested their AWS credentials prior to class, and we had everyone successfully connected to their own AWS instance using an image that I created specifically for this course. I had nightmares that half the class would show up unprepared and we'd lose everyone in the first half hour. This was a huge relief that this worked so well.

AM part 1: Jessica did an excellent job with the intro to Unix shell session. This used material that we adapted from some SWC and some Data Carpentry material, but adapted to the data we were actually using in AM part 2. Adapted material was attributed as appropriate.

AM part 2: this was a little bit rushed, but I know some things to fix next time.

PM part 1: I used material I created before SWC started working on R material. I've used this material in the past, and I think it works reasonably well, at least judging from the feedback we've gotten before. But personally I'm becoming less and less happy with it for various reasons, and I may consider adapting some of the SWC or data carpentry R material once these communities decide where they're going with them.

PM part 2: this was also mostly material I had used in the past which has worked well. I started this material about a year ago, and during last spring's Mozilla sprint, Rob Beagrie worked with me to whip some of this into shape for an SWC capstone project in bioinformatics. (I think the PR is still outstanding.) I intend on submitting a PR to data carpentry with this material, and perhaps back to SWC once the repos are split and we start talking about domain-specific capstone examples once more.

There was one particular part of this lesson which generated some confusion: where the column header metadata from one dataset had to match the row header metadata from another dataset, so that the data and metadata could be linked into a single object. When I run this lesson again I'd like to look at other ways of doing this kind of analysis to avoid having to go into this. It's an important concept, but I couldn't do it justice in the amount of time I had.

Links to the compiled course materials are here, and sources accessible on GitHub via the usual routine: 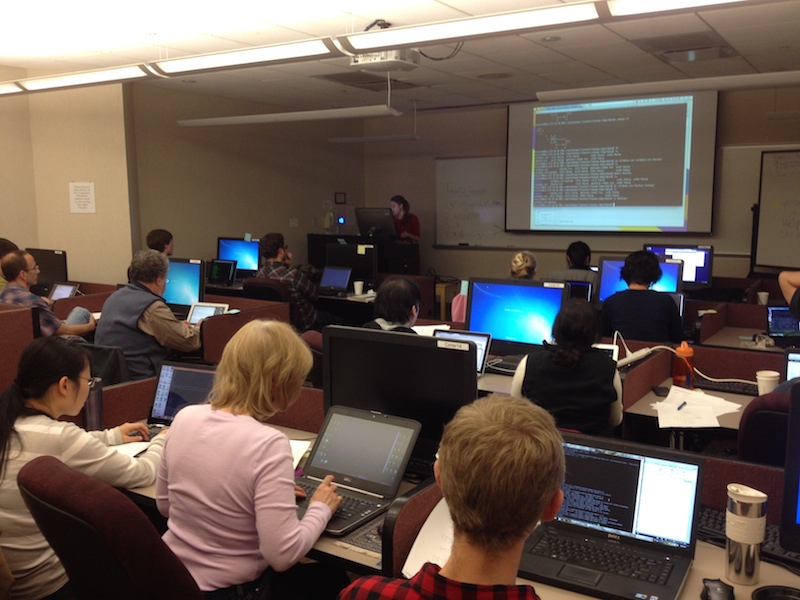 « Workshop at GeoSim (Potsdam)
Archive
Why It Matters »