On 21st August, I attended INTECOL13 in London's Docklands. The 11th International Congress of Ecology, hosted by the British Ecological Society and INTECOL, is one of the world's premier conference for ecologists.

At the invitation of Matthew Smith from the BES Computational Ecology Specialist Interest Group and Microsoft Research, and Greg Wilson from Software Carpentry, I ran the latest instalment of The Software Sustainability Institute's "what makes good code good" discussions...

I'd expected about 20 attendees and was pleasantly surprised (nay, stunned) when about 100 turned up. Fortunately, Matthew, my Institute colleagues Carole Goble and Steve Crouch were on hand to help as was Daniel Falster, a Software Carpentry instructor from Macquarie University, Australia. And, given there was only 1 flip chart available, I was glad I'd packaged a good supply of sticky notes.

A tally of the votes for each category, from the content of the sticky notes filled in by each group of attendees, is shown in the following pie chart, 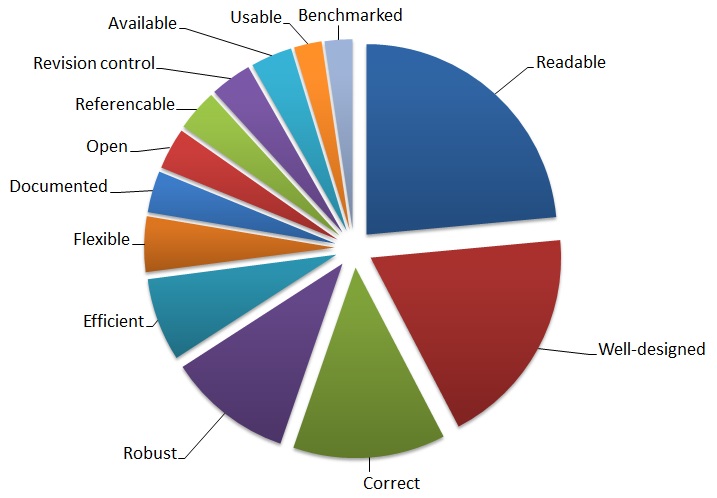 The responses and the focus on readability, clarity and correctness, overlap closely with commonly-understood definitions of good code as taught on software development courses or expressed in numerous articles and blogs (see, for example, What makes good code good by Paul DiLascia, MSDN Magazine, 07/2004, p144, or Christopher Diggins's The Properties of Good Code, 27/09/2005).

A number of blockers that can inhibit producing "good code" were also suggested. These included:

A big thank you to Matthew and Greg for inviting the Institute to run the session, the INTECOL13 organisers for allowing us to do so, Carole, Steve, Matthew and Daniel for helping out, and the attendees themselves for taking part and sharing their time, experiences and opinions.