I have recently organised a bootcamp at the University of Southampton, as part of my Software Sustainability Institute fellowship. I hadn't actually attended a bootcamp before (I was meant to, but unfortunately had to cancel) so it was a little nerve-wracking doing all of the organising - it all worked out well in the end though. 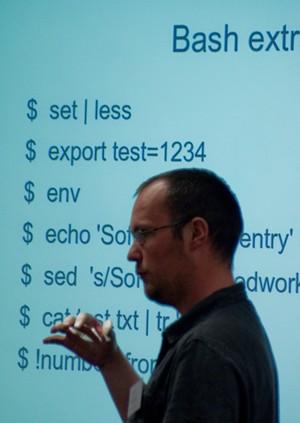 The bootcamp was primarily for students at the Institute for Complex Systems Simulation, from which we got around 35 students, with 15 students from the university's Computational Modelling Group making up a grand total of 50 attendees. As the course was primarily designed for the ICSS, I did a very early pre-questionnaire asking what topics the ICSS students would like to cover - which was very much appreciated - and this early discussion got registrations off to a good start. In fact, we had around 20 people on the waiting list at one point, which allowed us to easily fill up places when people dropped out. In the end we had 48 people registered on the day, of whom 42 attended.

There were some changes in the team of instructors during the planning of the bootcamp, as one instructor dropped out part way through the planning process, but we still managed to keep going with the same topics we had planned, and were instructed by Nelle Varoquaux and James Morrison. The ICSS at Southampton kindly paid expenses for the instructors, and provided us with very tasty buffet lunches as well as coffee/cakes for the morning and afternoon breaks.

At the end of the final day we did the traditional good-point, bad-point questions around the room and got the useful comments below:

From the post-event questionnaire, 100% of respondants found the boot camp enjoyable, useful and will apply some of the techniques in their work.

The room we managed to book for the bootcamp (85 / 2207 for anyone reading this in future before another bootcamp at Southampton) worked very well. It was large enough to fit all of the attendees in, was air conditioned, had plenty of space for helpers to move around, and had space outside for people to mill around during the lunch and coffee breaks. We deliberately re-arranged the room to have a large central aisle with tables either side, so that the helpers only had a maximum of four people to squeeze past to help someone, and this was very effective. The only improvement to the room would have been having two projectors - we did bring a spare projector and use it, but it was so dim that we decided we couldn't really use it for important things (hence putting the Etherpad on there).

As with all bootcamps, we struggled with a wide mix of students coming to the course - some of which had very little (if any) experience with Python. However, we managed to keep most people with us, and I don't think anyone didn't turn up for the second day. We had a lovely comment that "I am really pleased with myself that I stayed until 5pm and am coming back tomorrow - so that is good news, thanks!". In fact, that comment came through the brilliant red/green post-it note feedback mechanism. We used these post-it notes in the standard 'notification'-type way (where students stick a red post-it on their laptop when they have problems, and a green when they have done the exercise), but we also got students to write on the post-it notes before each break in a session, listing a good thing that they really understood on the green post-it, and something they were struggling with on the red post-it note. This was really useful for the instructors, and we were able to tailor the subsequent part of these sessions to answer the specific questions that were raised.

I think the structure of the bootcamp worked very well, particularly as we had a lot of time allocated for each session, so we could go into more depth but also not worry too much about time. However, the real stars of the show were the instructors - and they deserve huge thanks. I think it is appropriate to finish with a comment from one of the students on one of their green post-it notes:

Thank you for selecting such knowledgable people to instruct this course!