Back in August we did an alpha test of our driver's licence for DiRAC in conjunction with The Software Sustainability Institute. In the spirit of iterative development, we revised our test in light of our experiences and two weeks ago we did a 2nd dry-run. Four researchers based at University College London kindly agreed to take part as examinees, Dr. Jeremy Yates of DiRAC made the local arrangements, and James Hetherington of UCL, a newly-appointed fellow of The Software Sustainability Institute, provided local assistance.

In light of the alpha test, we'd made the following changes,

We alloted one hour to the dry-run but, on the day, extended this to two hours. Within this time the examinees attempted all the exercises (version control, shell, automation and Make and unit testing) bar a code review exercise. Experiences and observations included:

Despite these challenges, the examinees stated that they'd learned a lot and the test was valuable in highlighting things that they didn't know. This is a very good outcome and one which we'd hope such a test would achieve.

We are now implementing changes in light of the above and will be doing a 3rd dry-run week beginning 25th February. We have also drafted a certificate which all researchers who complete the test will receive (along with a Mozilla open badge) when it goes live: 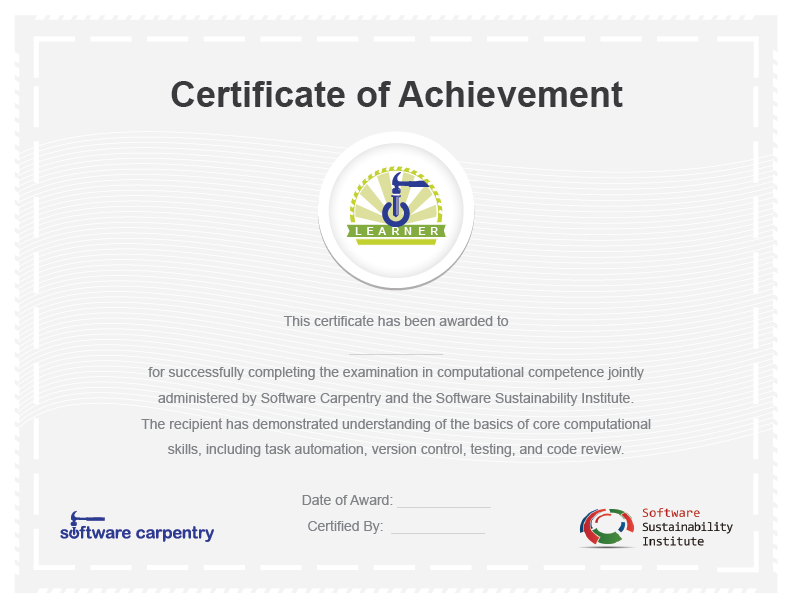 « Partnering with the SSI
Archive
Registration for Amsterdam Bootcamp is Open »