Today I would like to share with other scientists the power of dictionaries. I recently learned about this data structure during a Software Carpentry bootcamp that Greg Wilson and Ethan White organized. Greg and Jason Pell (from Michigan State) visited Utah State University for a two day bootcamp where I am a postdoc studying patterns of biodiversity. During that time we covered a whole slew of topics, but today I wanted to demonstrate how dictionaries helped to significantly speed up my Python code.

Before we begin this demonstration let's import two necessary libraries into our Python interpreter. We'll import division from __future__ so that Python carries out 'true' division instead of 'classic' division, and we'll import time from time so that we can time how much time our functions take to run.

A dictionary is a data structure that is used to look-up a value given an associated key (i.e. its name). Check out the Software Carpentry lecture on dictionaries for a full and technical introduction. Let's do a quick warm-up with dictionaries in Python:

For my own research purposes I have been struggling with how to efficiently compute very computationally intensive recursion equations. Specifically I have been attempting to code John Harte et al.'s Hypothesis of Equal Allocation Probabilities (HEAP) model. This is a model for how probable it would be to observe n individuals of a species in a sample of area A located within a larger area A0 that contains a total of n0 individuals. Harte et al.'s solution to this problem is encapsulated in the following equations: 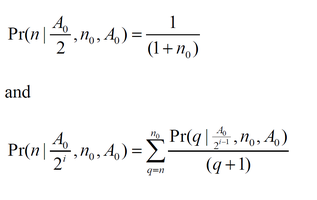 which can be encoded in Python by a very simple function:

This function does the job but notice as A0 increases the function will call itself thousands of times. Additionally it will compute some of the same values many times, for example to calculate Pr(3 | 1, 5, 8) the following probabilities are computed:

so as you can see identical probability values are computed multiple times. The number of multiple identical values increases primarily as A0 increases relative to A (i.e., as the number of recursions increases). Here is where dictionaries enter the picture. If we could either 1) build a dictionary from scratch as we move through the computation or 2) supply a ready made dictionary we could recoup any speed losses that we experienced by having to compute the same probability value multiple times. In Python we can accomplish this with the following function:

Note that in this function we use a three valued key (n, n0, i). This means that for each specific combination of these three values there is a specific probability that is stored in the dictionary.

Now that we have our two functions that compute the same probability lets see how much of a speed boast using dictionaries gives us. We'll define a new function to carry out these time tests:

To quote Greg this demonstrates that dictionaries are "more gooder". As we increase A0 relative to A the number of recursions increases and the relative speedup offered by the dictionary approach will increase exponentially... even more more gooder?

That's all I have for today on dictionaries. If you have questions or suggestions please post them below. I do have a quick additional technical note on dictionaries that contained a Python surprise for me and could have resulted in a nasty bug if I had not caught this.

Now if you've been following very closely you may ask why is the three valued key "(n, n0, i)" needed in the function "heap_prob_dict" when the equation only varies two values, n and i and not n0. In other words, for a given set of starting values all the keys in the dictionary will have the same n0 so why include it in the key tuple? The reason we have to include n0 in the key tuple is for two reasons:

1) we may want to supply "heap_prob_dict" a larger dictionary that we have created ahead of time for many different values of n0, and

2) Python will store the dictionary "pdict" in memory even after the function has returned its result.

Therefore if you call the function again, even though you may not supply "pdict" explicitly, Python will pull it from memory and supply the key — value pairs that it computed on the last run of the function. If the two subsequent runs of the function are for different value of n0 then the wrong answer will be returned if n0 is not supplied in the key id. To demonstrate this compare two successive time trials with the same staring parameters. The second trial should give you a much larger apparent speed up from using dictionaries because the dictionary is being called from memory.

« SoundSoftware 2012: Workshop on Software and Data for Audio and Music Research
Archive
Introduction to NumPy Tutorial »