Space constraints at U. Chicago meant that only 50 empty seats could be secured for two contiguous days on campus. But, the room was lovely! 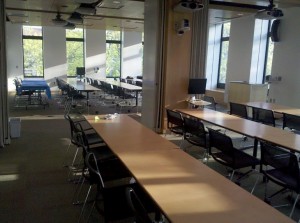 Thus, though the first day of enrollment brought 125 requests for tickets, only 50 could be invited. Despite the valiant efforts of Anthony Scopatz and the FLASH center administrators, no extra space could be found. The ubiquitous Anthony Scopatz, organizer extraordinaire, insisted a few days beforehand that accepted students unable to attend step aside to allow tickets to be granted to students on the wait list. Unfortunately, there were 20 no-shows nonetheless. 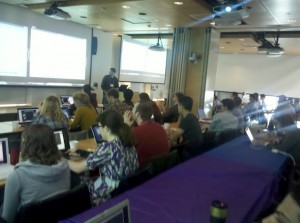 The discouraging lesson from this is that maximal attendance is not guaranteed even when demand is not the constraint.

Encouraging lessons were learned too. The bootcamp was taught on virtual machines, a favorite tactic of Hacker Within bootcamps, which nearly eradicated technical difficulties. Since all students were following along in identical linux environments customized for the bootcamp, initial set up took less than half an hour, and there were no interruptions thereafter. Feedback from the (mostly post-doc and grad student) attendees included comments echoing common themes:

Excellent reviews, if we do say so ourselves!

« Solution to Data Checking Problem
Archive
On Crossing Australia (or, Further Thoughts on What to Teach Researchers about the Web) »