Our 2011 Software Carpentry bootcamp, hosted with help by The Hacker Within and Scinet, was a huge success. We hosted 25 students for two very full days of hands on introductions to Python, The Shell, Nose tests, SVN, and sqlite.

So what did we learn? We're still waiting on participant feedback, but a few things come to mind.

First, wow, how did we screw software installation up so very badly? Most of our technical problems can from inconsistencies between various Python builds. Some students installed numpy separately from python and ran into version mismatches. The demo packages were missing from some people's iPython installations (including my own!) That doesn't even mention Cygwin. We got by thanks to the help of the wonderful volunteers who were able to sort out most of the problems, but it's hard to pitch a produce that is that difficult to get up and running. Imagine if we tried to publish papers as inaccessible as our code.

Second, this bootcamp was a success because we got people using software on their machines from the very start. People have the programs, they have example code, and they are ready to use the thing we taught them. It's no small thing to meld good exercises with lectures, especially when people get confused or ask questions and get behind. It takes a team of people who can jump in and help participants through error messages, lost connections, typos, and bugs.

So in the end, it was all about the people. Thanks to Jonathan Dursi, Jonathan Deber, Keven Brown, David Wolever, Katy Huff, Orion Buske, and Greg Wilson for making this bootcamp a success. 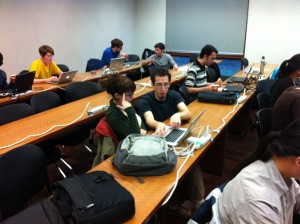 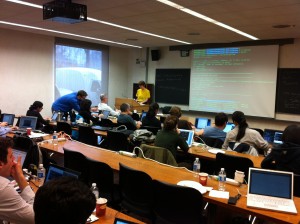